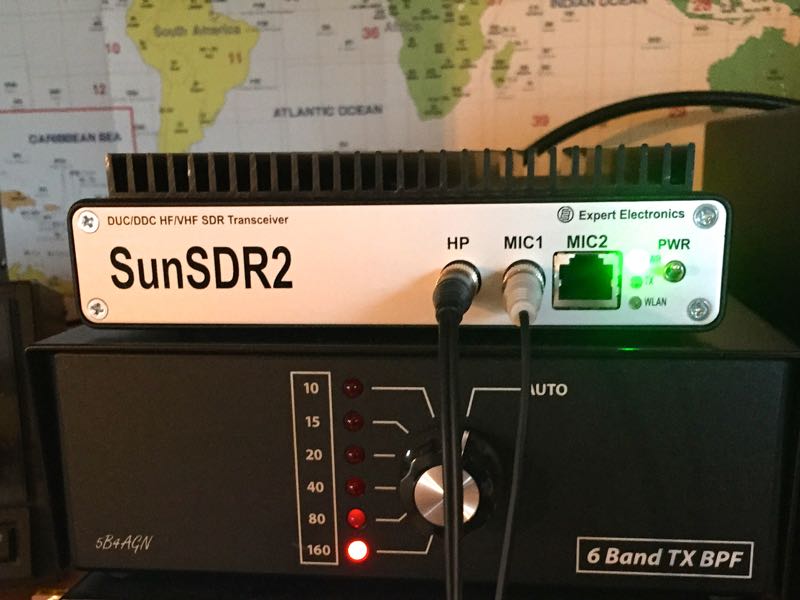 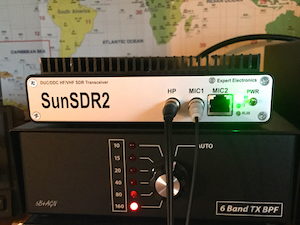 A 160 meter contest QRP is much more fun than you might believe! In CQ-160 SSB contest this winter I used the SunSDR2, Software Defined Radio, running with only 5 watt QRP power. I logged more than 200 QSOs and the claimed score is almost half the number of my SM Low Power record and more than a third of my High Power and High Power Assisted records

Don’t get me wrong, QRP in an SSB contest is not easy. Especially not on 160 meter! Mostly its hard work and slow rates, but I was surprised how well some operators heard me in the QRM. Even DX stations like CR3L and RA9Y picked me up with ease. On the other hand there where some really strong stations out there that definitely lacked in the RX antenna department.

Most of the 18 hours of operating I was doing S&P, Search and Pounce. The Meothod I used was to sweep the bands for stations to work. As soon as i found a ‘hole’ I tried to get a run going.

The radio used  was a SunSDR2, a physically small but loaded Russian SDR, Software Defined Radio, from Expert Electronics. Having the band scope made big a difference for S&P but also made it simple to quickly locate “holes” in the QRM to run in. Using the SDR band scope really spends up finding a new run frequency.

The SunSDR2 has a good RX, good software and quite a few features and functions makes it a very good SDR for contesting. In fact, it was developed with contesting in mind. The optional control pad for the SunSDR2 is really useful for tuning and controlling the radio while letting the logging software retain the focus so its always ready for the operator to enter new calls.

The SunSDR controller allows for extensive customisation. I preprogrammed buttons to zoom the band cope in an out. I put IF Shift and Width on adjustment knobs to make filter changes a breeze, I put ANF, automatic notch filer on other buttons. As my FCP vertical easily easily detunes in rain and humidity I put TONE on one button to be able to generate a carrier for quick retune of the amplifier.
I am very satisfied with the claimed result. When the contest was over I had 203 unique contacts logged in 34 DXCCs. 99% of the logged calls are obviously in EU with DL and SP in the top. The only DX worked where CR3L and RA9Y (but many more where heard).  The claimed score is 34.442 with a #5 world rank. Pretty good for a QRP effort in a 160 meter SSV Contest!
Equipment
SunSDR2 with controller
Top loaded vertical, 20 meter
Pennants in NE and NW
Clifton Labs active vertical
This article is an excerpt of the full article available at the SE0X Contest station blog.